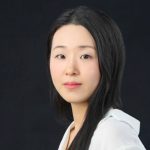 But there’s room for joy in the dark
future growing wings.
She believes this with resistance to life
fading. [Believe this.] The war’s been long
upon her. Is here to last. Is here
to outlive the time few mattered
more than passion.
[The fruitless act of planting
a seed in an open wound
that won’t bloom.] She longs to be taken
under the wing of an impartial mind.
[There is a room for joy in the dark.]
Clouds unable to defuse
a chain of events, even seasonal rain.

#
[Sure life has its way of silencing
the dead. But the dead, a way
of breaking it over and over.]

#
Children bloat in a bog of light, snow thick on trees like maggots. Weather thins into an
old rage into myths. The ocean’s heart ripples in circles as if to crown. Her lover thinks a
cabbage is a sick joke–wrappings as a gift. She knows it’s the unwrapping. [Neither thinks
the missile was a joke.] Truth has a glare to it, a form of ice. They drink what’s thawed.
Extrapolate its first shape.

#
She waits for the perfect moment
to witness the world.
So important to have curtains,
she tells her lover. One must prepare
for the first thing to see,
every day, that’s not of oneself.

#
May the last shovel of dark months disappear by noon. May soldiers march through and
on. She wishes the world a ledge— there’s no stopping it falling, there’s an utter lack of
will in falling. The first soldier to exit the woods has a gun in place of his skull. She believes
in the wingbone of a trigger. The livid god he shoulders away.

An egg is on her mind.
She turns it over,
it sizzles on the hot surface.
Every word, every said
feeling, an echo bounced
off the mind. This is the source
of all our pain, she says,
chicken or egg. What comes
after and from where.

“Generous offer,” says the ad for the corn she eats out of its can. Generous in a time of
war.  Generous compared with the rest.  Generous, about the quality of the corn.
Generosity is the sun that  dawns  on  her  crowded  world,  each  basking  in  a  whole  of  its
presence. In broad daylight, cabbages curled up like infants outnumbered by more of their
own. She can hear the sun whizzing—an ancient motor cursing under its breath.

Kids born in war start to call her Creek. They welter in the depths of her grief and emerge
like bones, dripping. One of them falls climbing out and starts to wail. A child points him
out: [another creek.]

In death nothing happens but leaves falling.  She’s down on her back with red leaves
descending, each slow as the next century. Each as unsure. They slap, slap on her face,
hands on landing.  [Each belongs to someone who died before his time, without her
minding.] Time backs out of the deafening red when there’s no time—the way of everyday
life spent mindless. The way of war. [In life nothing happens but the leaves reversing.]

Mourners come flowers in arms. [Armed with them.] Hydrangea. Red hot poker. Baby’s
breath. Aster and gardenia. They all mourn the present: [what should we do, what should
I  do?] Over her dead body each mourns itself, flowers in its mouth and ears, in its hair and
the hook of its arms and fingers, and its lifeless limbs.  Each bloom, air congeals like
formula.

[At the foot of the stairwell the past falls down
the future recovers its memory.]

She sits astride a barn stool, arched by age. The upkeep of living with both feet on the
ground  has  tried  her.  She  awakes  on  the  landmarks  of  pain  across  her  back.  Confuses
guests and ghosts. Misplaces rage everywhere. In the skull she’s never left since the war.
Ghosts, untold deathbed wishes, put random words in her mouth. In the strait gate she
used to place faith. She awakes blindfolded by her own fingers, awakes screaming, god’s
been pain [since the first pain bloated in her mouth like a Hallelujah], awakes, a hymn.