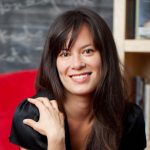 For his funeral, my father is requesting Get Down Tonight.

“Not to listen,” he says. “To shimmy.” He’s off the couch and moving his hips. In the lamplight his belly barely jiggles. “Like this, but with a shroud.”

Suddenly he scares me. Making jazz hands like that.

To build a TV tower is dangerous, and that’s why Dad and his friend signed up.

“Are these necessary?” said Gordie, lifting hardhats they were given. He held it away from his body, as if a bag of poop.

They were young then– I didn’t exist yet. But by now I know every detail. When Dad thinks of this time his mouth moves too quickly, like a rush of water I cannot stop.

Into the earth they dug a crater and filled it with concrete. Drilled in giant bars and formed a rising lattice of steel. Dad hoisted new bars from the platform for Gordie to put in place, and they worked this way all summer, smoking cigarettes and admiring their strength.

Such a structure it was: so mammoth. Red flashing strobe lights to warn off the planes. Wind blowing through the beams like insults that don’t work. Dad and Gordie aimed to reach 1466 feet, to send Colombo and FM radio to their parents, their friends, and the girls they tried to sleep with that summer.

Every week they’d make one story. Then climb atop and make another story.

One day they stepped in the two-man elevator. Dad held the cold bars with one hand and his rosary in the other, too tight to unwind itself. Gordie pressed the button, and they shot up through a layer of mist, into the blue air above. They stepped onto the square platform, the size of a card table. Wind pressed Dad’s blinking eyelids and rushed into mouth. They could see the shapes of lakes, and traffic blinking on the highway like spilled diamond necklaces.

No day—says my father—has been as beautiful since. I think, wincing, that he’s only caught up in his story. My recitals, my birthday: those must be up there too.

At the summer’s end they were almost finished, and Gordie was up with his team on that platform, placing a section of antenna, when the platform wobbled, a cable snapped, and the antenna fell and Dad’s best friend fell with it.

His wife, in shock, was the one they took to the hospital. No one on the platform survived. Beyond the ambulance, on the horizon, the tower bent over like spaghetti.

“All of this,” says Dad, “so we can have television.” He squeezes the tablecloth, reminding himself that the day is long gone.

Mondays, Wednesdays, and Sundays, Dad drives our truck to his Meeting. Six to seven-thirty, in the basement of Roseville Lutheran. I’m told there are speeches! Rainbow M&Ms, in cone paper cups!

But that’s about all I know. “Peanut, it’s anonymous,” he says when I want to come with. Kisses my cheek, backs out the truck, and waves at me from behind the rolled-up window. Off he goes to be Anonymous, in a room where his daughter is Anonymous too.

Mom and I stay behind, sucking broth from reheated dumplings—we can’t go anywhere until he comes back. “He’s slipping,” she says, biting her lip. “I can feel it. I shouldn’t be saying this. And yet.”

When he was young, before the Meetings, Mom says, he was Hell on Wheels. “We sure had fun,” she sighs, into her glass of milk. She peers at me, raising a penciled eyebrow. “He does it for you, you know.”

What do they learn in the Meetings? I ask.

“How to not be a jackass.” She reaches for my chin. When she pulls away the napkin it’s marked with soy sauce that I didn’t know was there.

“Just kidding,” she says, wiping hard. “They learn how to be sane.”

“Sane is being someone who can feel good without joining a cult.”

She straightens herself, tries again.

“Sane is having priorities,” she says. “Sane is this. It’s this.”