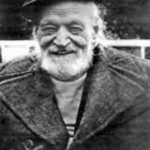 Poetry in translation
by Giuseppe Ungaretti and Wally Swist

translated from Italian by Wally Swist

Our afflictions
merge together

And how carried away
she remains

My dark heart dispersed the need
for some refreshment

Ever since he looked
into the immortal face
of the world

My impoverished heart
stunned at not knowing

Giuseppe Ungaretti (1888-1970), Italian modernist poet, journalist, essayist, critic, and academic. Influenced by symbolism, especially the French-Romanian poet Tristan Tzara, he was briefly aligned with futurism, Ungaretti lead the experimental trend known as Ermetismo (“Hermeticism”), in which he advocated “a personal approach to poetry,” and  became one of the most significant contributors to 20th century Italian literature. Ungaretti debuted as a poet while fighting in the trenches in WWI, later publishing his iconic and possibly best-known book, L’Allegria (Cheerfulness, Swist translation). During the interwar period, he was a foreign-based correspondent, but after spending several years in Brazil, he returned to Italy during World War II, and was assigned a teaching post at the University of Rome, where he spent his final decades. In 1970, he was the initial recipient of the prestigious Neustadt International Prize for Literature, awarded biennially by World Literature Today.

Wally Swist’s books include Huang Po and the Dimensions of Love (Southern Illinois University Press, 2012), Awakening & Visitation, and Evanescence: Selected Poems (2020), with Shanti Arts. His translations have been and/or will be published in Chiron Review, Ezra: An Online Journal of Translation, Transference: Literary Journal Featuring the Art & Process of Translation, and Woven Tale Press. His latest book of essays, A Writer’s Statements on Beauty: New & Selected Essays & Reviews will be published in 2021 by Shanti Arts.