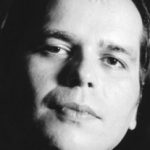 Poetry in translation
by Aleš Mustar and Manja Maksimovič

translated from Slovenian by Manja Maksimovič

On the Charles Bridge
instead of a passion play
hordes of tourists with short-term memory loss
unknowingly enact the role of refugees.
There is no more space for genuine puppeteers.
In souvenir shops the Good Soldier Švejk is rarely represented.
He has been replaced by Hello Kitty.
At The Black Ox a skinhead is serving beer,
mostly to foreigners.
To this day there is nobody in this city
who would grant Marina Tsvetaeva
spare room for a memorial space
so her soul could find peace at last.
Despite all the crosses and saints on the bridge
city authorities keep closing doors in the face of her fan,
Bethlehem-style.
After walking a Way of Sorrow,
a local official in the Všenory district takes pity on her
and directs her to the Information Point
in a tourist-less village
where Tsvetaeva once sank in mud to her knees.
The train ride takes time.
In a little room in a white soc-realist building
on a newly carpeted floor
on which Tsvetaeva would likely not have stepped,
huge pictures stand.
As I leave I feel at my back her perplexing stare
imploring me:
“Does your epoch also have no humanism to spare?”

Aleš Mustar was born in 1968 in Ljubljana, Slovenia. He is a poet and literary translator and works as a freelancer. He graduated from English language and literature at the University of Ljubljana, Slovenia and took his Ph.D. degree in Romanian literature at the University of Bucharest, Faculty of Letters, Romania. In 2005 he published a book of poetry C(o)urt Interpretations, which was nominated for the best debut author of the year and has been translated into English and Macedonian.  In 2017 he published his second book of poetry Middle Age, which was nominated for two of the most important prizes in Slovenia, for the best poetry collection published in the previous two years accorded by Slovene Writers’ Association and the Veronika award for the best  poetry collection of the year. His poems have appeared in translation in many foreign languages and have been included in many anthologies. He translates literature from Romanian and Macedonian, mostly contemporary poetry and fiction and so far has translated more than 25 volumes.  He also writes texts for alternative theatre. He contributed texts for theatre performances Sixteen Turns (En-Knap, 2005) and Feng Shot (Maska, 2011). He earns his living as a court interpreter.

Manja Maksimovič is kept in the cellar of Aleš Mustar at his beck and call as his exclusive translator. She translated C(ourt) Interpretations.  Other than that she posts photos and poems in Aprils and on Sundays at mexcessive.photo.blog.