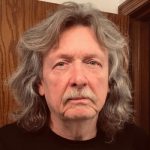 First off, you’re in an off-duty cabbie’s Chevy. In the front seat.
A fogbound field is boundary. Through a windshield, night hovers.
He’s said that that bus doesn’t run anymore, but he’ll get you there.
He’s failed, he says, to make clear the fare for the thirty-mile trip.
Seems not to care this is your first full day after military service.
Of course you would have done better to have started walking.
In an air-force-issue duffle of civvies you thought to pack:
a Swiss army knife on the floor at your feet . An open blade
you may want to use to answer the unsolicited stroking of a leg.
Maybe you like that “Whole Lotta Shakin’ Goin’ On” is playing,
but you’re a brittle glide of youth after the bus ride. Dazed-numb.
And when you say Fuck no, he reaches under a seat as if for a gun.
The air here, it’s like breathing loss or defeat if they gave off fumes.
You exit the car in media res and hit road surface like a bag of hope
for better. In addition to sacrificing a field jacket, the knees of your

Levis, a lot of flesh, you roll like the postal sack of Stupid you are.
What you see, picking yourself up, is the noisy orchestral motion
of grackles settling onto the power lines. Engines rev in the gullet
of dawn. Storefronts glow mostly with the light we see emitted
from stars. You drag yourself and the duffle to a field. Lie flat.
Somewhere down this road you rise to walk, your parents die.
When they die, your folks, you travel back here because they
were there for you on nights like this, saying what they said
and given that often, in Ohio, any victory is a pyrrhic one.
If excess of grief is any kind of crime, it’s a misdemeanor.
You’ll walk into an empty house. The beds will be there.
One your mother read herself to sleep in before she died.
The double with that sawn-level place in the footboard,
cherished furniture your pops marked as a consequence
of roughhousing in the world he was young in once.