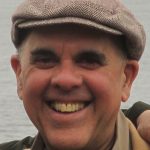 I’ll take your word for it—whatever you say,
whatever you teach, whatever you explain,
whatever you describe—I’ll take your word for it.
Whether science, literature, medicine, sports,
agriculture, history, theater or film, art or craft,
politics, philosophy, any field you may name—
make your pronouncement, sound bite, or claim,
adjust my perspective, expand my thought,
bolster, shake, or pooh-pooh my beliefs—I’ll take
your word for it. Let your word be ready
to quip, let it be quotable whenever a toast
is potable, let it zing in fluent English, let it play
all parts of speech like a versatile actor
an array of characters: noun, adjective, verb,
and adverb—I’ll take your word for it.
Obtuse, abstruse, high-falutin, far-fetched?
I won’t kvetch, I’ll take your word for it.
Let me say it out loud, alone and to friends,
engrave it, buff it, stain it, shellack it,
conversationally unpack it, broadcast it,
test its reverb, take it out for a spin, floor it
without brakes on hairpin curves. Reckless,
you opine? Now it’s your word against mine,
circling in the sand, grappling antennas,
buzzing and winging, alert to a stinging.
This is absurd! I can’t break my own word—
my promise holds: I’ll take your word for it.
Your word is so cool, so memorable, so stud,
it rolls off the tongue, it won’t clunk like a dud,
it always behooves and slips into the groove.
Flip over three cups, stash your word under one,
switch them around, I’ll put my money down,
my discernment on the spot—hmm, it’s not
where I thought, but I’ll take your word for it.
Drop it in the mail, spring it from jail—no tracing
its trail. Your word for it is forceful and apt,
new-minted and hip, coined to win at any chance flip,
hammered into currency, yammered in the streets,
entered unanimously, by acclaim of the editors,
into the next Webster’s. They took your word for it.