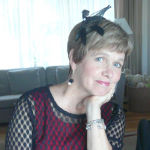 After a long day of writing at a friend’s house, we rest in her kitchen, sipping tea at the table before bed. Her son, home from graduate school, sits with us talking about his future as he pulls potato chips from a bag, his other hand touching the Buddhist amulets hanging around his neck. Outside, the moon waxes nearly full, while a summer breeze blows in the open window over the unwashed dinner dishes on the counter. We hear a knock on the back door, and in walks her son’s friend Joe, unplanned, just back from Afghanistan. He’s on military leave visiting nearby relatives with his wife and young daughter.

I met Joe here before he joined the army, but this time he looks older, his shoulders broader, his blond hair buzzed military style, and his dog tags clearly displayed around his neck. He’s 26 now, married and a sergeant with the 101st Airborne stationed at Fort Campbell, Kentucky. His mention of the base immediately pulls me into the conversation because I was born there. My father was also in the 101st  once upon a time, and he came and went from war as well, his posthumously received medals from Vietnam now on display at the Fort Campbell Museum.

When Joe talks about his two tours of duty to Afghanistan and Iraq, the present becomes the past. I am in two rooms as he talks: I am here in the present tense and in the past watching my father take apart his M16 rifle to clean on our kitchen table, then puts it back together while I diagram sentences for homework next to him. My mother sews on his khaki uniform patches at the other end of the table. I am here in my friend’s kitchen, and at the same time listening to my father and his buddies some late night as the spigot of war turns on and my father gets drunk, playing with a pistol like a toy. I am in that room of the past with photographs of dead soldiers placed in albums, doors slamming with shouts of rage between my parents so that none of us can sleep.

Within minutes Joe’s voice continues to rise with his own rant. Something bitter, harsh and nearly impossible to describe spills across the linoleum floor and vibrates like raw nerves stretched way too thin. Tension hammers away like an ancient drum I’ve heard before. He stands up, paces the floor, sits down again while his voice intensifies and swells with a percussive beat hardly his own. He knocks his fist on the table with a loud force.

“Pardon my language,” he pleads, “but that mother fuckin’ commander nearly got us blown away. You know how many scouts get killed with those damn IED’s?” I try to imagine the scene he describes of pulling a soldier from an armored vehicle, the guy screaming for four hours straight while Joe worked to get the door off. Later, he pantomimes kicking-in a stranger’s front door while pointing an invisible M4 at a woman and her children. This room rattles with the brutal weight of violence, the throb of his fingers on that trigger. Rage climbs the walls.

Finally, reaching up to touch his dog tags, a finished beer in his hand, he admits that his wife kicked him out tonight. “We’ve had another fight,” he says as he opens another one. “She doesn’t understand what I’m going through.” He runs his hand through his closely cropped hair and tells us in the same breath how much he loves his family, how he’s not sure he wants to stay in the military but he has a chance to go to officer’s training. This young soldier—smart, handsome, and already an old man—says he and his PJ, pregnant wife with their second child, want to see a counselor on base because of all the fights. “The problem is,” he says, “there are too many of us and so few counselors.”

I never met PJ or his one-year-old daughter but I begin to think of them right there as the clock clicks past midnight, a couple of generations removed from that war in Asia where my father fought back in the 60s. With that opening comes memory of my mother. Like PJ, she was young and wanted a family, love and a home, but being married to a soldier meant being married to the military, which was the first betrayal of their marriage. My mother learned as PJ must be learning, that unit readiness means family readiness, and that the intoxicating call to duty wins over family life every single time.

The army says it’s doing it differently this time, Joe tells us as he rolls his eyes with cynicism and gets himself another beer. “They fly over things like lobsters and steak, build gyms, and install air conditioning—what good is that going to do? It’s crazy, man, it’s crazy.”

It’s still a story of two places: life falling apart at home and life disappearing in a faraway war. The men still return altered and that alters the women too, and in the end, the whole family. Joe seems like he’s on the verge of going nuts and that magnitude spreads a kind of toxin in the room. I can hardly stand it. I want to walk away like the so-called “higher ups,” as my parents used to call those in charge, demanding: Fight this war for us. Bury your own. Come home in glory.

Joe continues to tell non-stop stories with a frenetic energy about dead friends, exploding bombs, exhaustion so profound he can no longer see. He’s out of control and keeps talking as though he’s trying to save something by doing so. It’s late and after a while it’s difficult to listen to as some angry demon takes over his body and an enormous despair casts its shadow across the late night with an electric jolt of unrestrained terror. I imagine him nearly on the verge of a breakdown. War is its own kind of breakdown. No wonder PJ and Joe are fighting.

The next day Joe brings over PJ and their baby daughter for a visit before they leave for Fort Campbell. He wants us to meet his family. While we sit in the living room, the baby crawls into his lap, all smiles and giggles. She touches his face with her little hand trying to get his attention. Her blue eyes look just like his, surely father and daughter. Her hair donned with a pink bow to match her pink dress. They play a game of patty cake and then he bounces her on his knee, bragging about what a good and smart girl she is. I watch from the corner of the room and recall riding on my father’s back—he on all fours and me playing like he was a pony, the two of us laughing so hard we can hardly catch our breath. Then he was gone.

Someone asks Joe what’s next, and the conversation moves back and forth between children, life on base and the suspicious reasons for being in Iraq in the first place. PJ rubs her pregnant belly without saying much. She doesn’t smile.

“Maybe I’ll stay in and become an officer,” Joe repeats as he swings his daughter in the air and she giggles some more. “Or maybe I’ll get out. I don’t know.”

He hands PJ their daughter, and she interrupts and says how hard it will be to be so far from her family. “Joe will probably return to Iraq after the new baby is born.” When she says that I can feel her palpable loneliness, the magnitude of what’s at stake. She closes her eyes and takes a deep breath, like she wants to cry and doesn’t know what to do next. At the same time I can see my mother sitting beside her, another baby on the way, toys scattered on worn lawns while uniformed men pack rucksacks to leave or do push-ups near parade grounds. My young mother waiting with the other army wives, always waiting for something.

As they load up their car and strap their daughter into a baby seat, I can’t help but imagine the possibilities ahead of them. I feel the divisions already at work. What can I tell them? Before they go, should I mention my father’s flag-draped coffin, my mother’s shock treatments in a mental institution, the weight of maddening silence in a country unwilling to connect war with these harsh realities? What will this little girl’s future be like, smiling now in the back seat as she puts her little hand on the window for a gesture of goodbye.