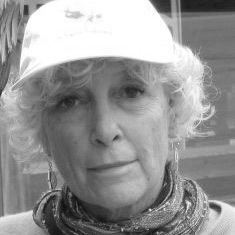 When I was dying at seventeen I was too young yet old enough. I stole Chinese slippers with tiny beaded flowers from the store around the corner when I was dying, wore my longest silver earrings, my mirrored, tasseled blouse, my Indian silk skirt. I was a kaleidoscope of melting brightness.

I ate donuts for breakfast when I was dying. I stopped at the fancy ice cream parlor and ate never-tasted flavors: coconut and mango and ginger. I bought an egg cream at the expensive deli and drank it slowly.

When I was dying I strutted down the ghetto streets of my neighborhood to say hello and smile at the boys who whistled and called in English and Spanish. I let the janitor’s son kiss me in the alley as he emptied the trashcans and didn’t mind his dirty hands. I wore his mother’s lipstick when he asked me to, looking into a sliver of mirror and pursing my lips to get it right. I kissed him ten times when I was dying and left the imprints of crimson dreams on his face. He said he’d never wash them off. He taught me to say beso and dulce. He taught me to say muerte and the word was quiet and certain on my lips.

I took the elevated train from Brooklyn to Manhattan when I was dying and looked down without fear of falling. When Brooklyn vanished behind me, I let myself hate it and miss it and love it and call it home. Dying released me from living my mother’s life: from poverty and gangs and roaches and marauding rats. It released me from worry about who I would marry or a dead-end, numbing job, from how many children I’d support when their father abandoned us because that’s what fathers do.

When I was dying I strolled Greenwich Village, stared into an art gallery window at slashes and circles and drips of color titled “Lost inside Myself” or “Sour Moon” or “Lost Childhood” then opened the door and shouted, “I don’t see it.”  I paused at the hippie church with the radical priests and waved good-by and thanked them for the movies they showed and the discussions they led.  I sang with folk singers in Washington Square Park without self-consciousness and sniffed necklaces of sweet African seeds from the Nigerian vendor’s stall on the corner.  I ran my fingers over the books in the small musty shop below street level, closing my eyes to feel the past that floated from them like escaping memories.

I had tunnel vision when I was dying, the world beginning to fold into dizzying shapes and colors, my body almost too weary to be upright. I chose to die under the trees at the Cloisters in Washington Heights. I walked from the subway to the park beside a river that was clean and the waves sang farewell laments. I laid hands on the trees in Fort Tryon Park and their strength and antiquity gave me comfort. I took one small lonely stone shimmering with mica lying distant from other stones, to light my way when I was dying.

I lay in sweet summer grass under a hot bright sun, the breeze inundated by roses and incense. Ancient stone columns divided light and shadow in shifting patterns. Unfamiliar chants, beautiful and strange, echoed from between the columns like final breaths. When I was dying I forgave my mother for her ceaseless anger and my father for leaving us with nothing but bills. I willed my brother in the foster home all the years I wouldn’t have, tying them together with love so they wouldn’t break apart and sent them on their way. I wished my best friend escape from the stepfather who touched her and the loneliness of nights she hid in the alley then sent a trail of hope to guide her somewhere safe. The taunts of dirty Jew became just words that no longer hurt.

My last sight, when I was dying, was the sky flowing across the world and when I woke later the daylight sky had died its own death, I gathered the visible starlight and remnants of surrender and left. Everything had fallen from me as it does when you are dying, leaving someone new and fearless. Next day when the doctor told me I wasn’t dying, I told him I already had.