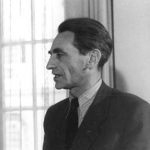 As the moon shadows
the jasmine bush
and the star-shaped
blossoms curl,

he utters a cry
of surprise and delight,
but damns the nocturnal
insects swarming the jasmine,
stinging and biting.

He smells the dark
avenues that run through
the garden, the dazzling
pale white flowers
fading in and out.

And yet the moment
fills with fear
as frightened shadows
drop, and green planes
dive into the flames
and burn up.

And in my own time
I hear the voice of truth on the tape
speaking for those gone now,
the slow elegies building
anger inside me.

And the smell of the jasmine flowers
leads me deeper into the dark garden.