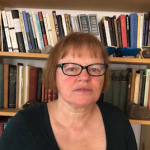 Robbie Gamble is the author of A Can of Pinto Beans, a chapbook that chronicles his experiences volunteering with No More Deaths, an organization that provides medical and material support for migrants passing through dangerous stretches of the Sonoran Desert along the Arizona/Mexico border. Eileen Cleary is the author of two poetry collections: Child Ward of the Commonwealth (Main Street Rag Publishing) and 2 A.M. with Keats (Nixes Mate Press). She is the Editor-in-Chief of the Lily Poetry Review and Lily Poetry Review Books. She published A Can of Pinto Beans in January 2022. The two of them chatted on Zoom about the project.

Eileen Cleary: How did you set about thinking of how to tell the story in this book?

Robbie Gamble: The second time that I came back from Arizona, I was moved to write about the setting of the place, the pressure that migrants are under, and the extraordinary measures that the people I was volunteering with for No More Deaths were taking to try to save lives in a difficult situation. I’ve been working with people who have been crossing borders for most of my adult life, working with Central American refugees and undocumented folks who are homeless, and here I discovered powerful stories to be told, so I wrote a cluster of five poems about what I had witnessed, which we workshopped at one of the Lesley MFA residencies, with Adrian Matejka. And I thought, well, that’s nice, I have this set of poems; maybe I can publish a few of them somewhere, and that’s that. But you persisted over time in convincing me that this could be a book. I wrote a few more pieces after subsequent visits to the border, and I also realized that I had other material from journals and logbooks, and also artifacts that we had encountered in the desert. All these different pieces started coming together, and I realized that maybe there was enough to build a very slender volume.

EC: Often when I speak with people about your poetry, we talk in terms of witness, and there was a point made at your book launch about how you use artifacts in your poems, and how those artifacts help us experience what’s happening in the poems. I think of Szymborska, and how she often takes an anthropological approach, for example in her “Hunger Camp at Jaslo.” She doesn’t always find relics, but like you, she lists relics, and I’m wondering, for you, when you summon the relics into the poem, how do you think that makes a difference in humanizing the events?

RG: That’s such a good question. I think, as human beings, we’re tactile, sensory creatures, and so much of how we relate to the world is through all of our senses. The world we live in is not an abstraction, and although we’re capable of abstract thought, most of the way we interact is through concrete imagery. That’s the kind of poetry I’m most drawn to, where there is a strong concrete scaffolding of imagery to get into it. The things that move me when I’m in the desert are the artifacts that we find, because it’s such a vast space that we don’t often see the people we’re trying to help. But we would see evidence of them in an abandoned backpack, a can of pinto beans, or their bones. These objects were the manifestations through which we could tell their stories, rather than relying on dry statistics.

EC: Another important element of witness poetry is irony. Miguel Hernandez, in “The Lullaby of the Onion,” compares his reality as an adult in the Spanish Civil War to the hopes he had for his dead son, who had nursed from the breast of his starving mother. He says to his son, “Lark of my house, keep laughing.” Do you find irony helpful in your work?

RG: Yes, I think irony can be important, and even humor. There’s one poem in the book, “Moo,” which talks about how the border security forces contracted with Boeing to build this elaborate security system that was set off by dust storms and rain squalls and cows passing through, so Border Patrol agents were chasing after herds of cows, and they had to discontinue this system. It’s a funny story; and there’s irony there, and it’s also deadly serious. Border Patrol wanted to chase after people and apprehend them, and return them to their prior, often life-threatening circumstances. There is irony in all of that, seeing these white elephants of technology sitting out there in the desert, and knowing our tax dollars paid for them, and they’re useless.

EC: I know that you love to use forms. Can you tell us about how you chose the forms in this book, and how they’re helping to tell the story, specifically talking about the logbook entries?

RG: Well, I’ll be honest, I thought that what I had was too slender to fill a chapbook volume, so at first I thought, maybe this is filler, and maybe I can put something in this white space if I use these logbook bits, but then I realized that each of these logbooks entries tells, in shorthand, a very real story about this particular site, and what we know of what happened there. Sometimes nothing happened there, and sometimes we’d find empty jugs, and we’d know that somebody came here, they drank, and they were able to go on. So that’s a story, or else we’d find jugs that were destroyed, and that meant that viciousness occurred in this spot, which deprived people of sustenance to go on, and that’s a different kind of story. As a nurse, I realized a few years ago that my job essentially is to go in each day and see my team of patients and write a little narrative about each of them; that’s the nursing note. Basically, I’m a storyteller, and most of the nursing notes are uneventful: Mr. H’s blood pressure is stable today, and K’s leg wound is gradually healing. These are the narratives that will carry them through to the next day, to the next provider who will see them. But I realize that storytelling is baked into the form, the medium that we’re using, and whether it’s a nursing note, or a logbook entry about gallons of water, and they act as markers for the work at hand, in a clinic or in the desert, and each story makes a contribution to the larger whole.

EC: One of the poems that I found to be impossibly beautiful was “Figures,” and I don’t think it’s just the “cup of shade/ the scoop of canyon wall/ the entrance littered with flattened cans of Red Bull,” but also the idea of the O’odham people carrying squash and castor beans, all that’s happening on the ground, and even in space. It’s the small and the big. The Voyager is sliding further from home, just as the O’odham people do.

RG: I think you were hinting at this earlier, in reference to poetry speaking to the past, the present, and the future, and what excited me about this poem, when its intention came clear to me, was to speak, not just to the present moment, the present crisis on the border, but to look back across centuries, and to realize that there were these paths that the Tohono O’odham people had been using as trade routes down to the ocean and back up into the highlands, and that we were walking on paths that people had been using since before the European invasion. Also, from this same spot you could see this fantastical array of telescopes in the far distance, tracking another voyage that’s very much a future projection out into space. When I realized that all of this could be considered within the space of this one poem, it was a very exciting moment.

EC: Let’s talk about the poem “Hello Kitty Backpack.” Another writer might have mistakenly made this a persona poem. But here, you address the backpack, and you are wishing the backpack could tell you more about its missing companion. You don’t assume anything in this book, and don’t take on other people’s identities, not even the backpack, not presuming what it knows.

RG: I was trying to be careful not to assume other perspectives here. The one poem that is a persona poem is “What the Uncles Say,” and that narrative is conjecture, but it is constructed from stories that I have heard about, giving it a voice from known pieces, kind of a collage. I wrote a poem a while ago, that’s not part of this collection, from when I was in Japan with my family, and we were visiting the Atomic Museum in Hiroshima, and we encountered this exhibit, a half-melted tricycle. Again, it was an artifact, and it almost brought me to my knees to see this remnant of a child’s plaything, and I realized that the only way that I could respond to such a horrific event poetically was to address the tricycle directly, to ask questions about its existence. When I came upon this Hello Kitty Backpack in the desert, it was a very similar experience. It was so moving, the only thing I could do was engage in conversation with it. And I didn’t know its story. The owner of the backpack—I suspect it was a little girl—maybe she’s fine, maybe she’s somewhere now, or maybe she’s not, and there will never be a way to know.

EC: Right, and I think that’s an important thing to understand: that we can never know. It’s important that you’re recognizing that we don’t know, because it’s easy to assume the worst, or the best.

RG: And that’s our peculiarly American tendency to want to tie things up, either as a tragedy, or as a feel-good story. And so often we can’t do that.

EC: Is there anything else that you’d like to mention about the book that we haven’t covered?

RG: I guess I’d like to note that I’ve found that in good witness poetry, the poet is not at the center of the poem, but rather is an observer. I tried to adhere to that in these poems, particularly in this desert setting, which was not a part of the world which I was familiar with before I started this work. I very much felt as if I was a guest of the three overlapping cultures in the borderlands: the Latinx migrants who were passing through, the indigenous cultures who were so grounded in this space, and then the military/security forces who were trying to control everything. It felt like a privilege to witness people just trying to survive in the face of overwhelming technological forces, and a harsh, unrelenting, and also beautiful landscape.

A Can of Pinto Beans is available from Lily Poetry Review Press: https://lilypoetryreview.blog/lily-poetry-chapbooks/a-can-of-pinto-beans-by-robbie-gamble/