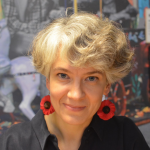 Poetry in translation
by Krystyna Dąbrowska and Karen Kovacik

translated from Polish by Karen Kovacik

Years ago, when Mrs. Kubicka saw a plane
in the sky, she’d throw down her scythe
and hide in the grain. Now she’s flying
for the first time to her daughter in America.
Who’s getting married, Mrs. Kubicka says,
to some good-for-nothing.
Under her clothes, she’s smuggling
her own wedding dress, dug out of storage.
She wound it in a belt like a bandage.
She knows: if they find it, they’ll seize it—
her whole life they’ve taken everything.
Off she heads to security. They order
her to remove the top layers of clothes.
With trembling fingers, Mrs. Kubicka
unties her scarf, unbuttons her sweater.
She passes through the gate, hears drumming,
which might be her heart. Someone’s hands
grab her, and her temples pound. Someone
repeats something. That she is free. To go.
Only then does she feel how heavy
that dress is. How it prickles her skin.

Mrs. Kubicka, sitting in the plane,
watches the patchwork of fields recede.

1.
She cut off the braid that reached her knees
and left her job as flute teacher
in a Bedouin school in the desert.
She rolled up angry banners. And packed her bags for good.
Only her language she kept her in her life.

She’s been reading in it since she was two.
At six, she began writing poems.

She talks in that language to her heat-loving flowers,
which she brought from Tel Aviv to Berlin
to adorn her girlfriend’s house.
The whole winter she shifts them around
to pursue the scant sun.

In that language her parents said:
we no longer have a daughter.
In that language the word shiva exists—
seven days of mourning for those closest.
Hila’s parents sat shiva for her older brother,
who killed himself in the army.
Now, Hila tells me as we drink coffee
in a Kreuzberg café, my father
is sitting shiva for me.

Hila was exempted from the service.
She studied history and music.
She found the melody of her own words
in the rhythms of Hebrew.

2.
Hila’s parents, children of the Shoah, emigrated
from Romania to Palestine.
In Hebrew they found a home,
which only later would they have to build anew.

Hila, their youngest, a late child
born in the state of Israel,
tore her language from that country
and took it like a tent on her trek.

When you say can I sleep
a little longer since this chunk
of dream has to melt in me
like ice in the spring,

when I complain about a writing slump
and you counsel Take it easy, same as me!
to which I say that’s like learning
vegetarianism from a cat,

when we recall our all-night trip
in a shaker of memories to the Vietnamese mountains,

or how in a certain European capital,
we found ourselves looking urgently
for a pee-friendly courtyard,

when we meet halfway
between your solitude and mine
and make the rounds of the neighborhood
where old women prop elbows
on sentinel pillows,

I want to place what we speak on a list
of endangered minority languages
because only two people know it
and it’s hard to preserve,
but also on a list of the strongest
because for now it shelters us.

These canoes have no bottom
because they’re spirit canoes.
This figure is hollow. In it
the shaman would wait to greet guests.
They’d cover bowls of hot soup
with these masks,
steam rising like breath through the lips—
and today the masks conceal hunger.

Krystyna Dąbrowska (b. 1979) studied graphic art at the Academy of Fine Arts in Warsaw. She translates poetry from English (including the work of W.C. Williams, W.B. Yeats, Thomas Hardy and Thom Gunn) and writes radio plays. She has produced four collections of poetry, Biuro podróży [Travel Agency]; Białe krzesła [White Chairs], awarded the Wisława Szymborska Prize and Kościelski Foundation Prize for emerging writers in 2013; Czas i przesłona [Time and Space], and Ścieżki dźwiękowe [Soundtracks]. Her work has appeared widely in English translation in journals such as The Nation, Harvard Review, Southern Review, Tupelo Quarterly, and Yale Review.

Karen Kovacik has published translations of contemporary Polish poetry in many journals, includingAmerican Poetry Review, Boston Review, Colorado Review, Crazyhorse, Poetry East, West Branch, Mid-American Review, Southern Review, Trafika Europe, Two Lines, and World Literature Toda. In 2011 and 2018, she was awarded fellowships in literary translation from the National Endowment for the Arts, and she’s the translator most recently of Jacek Dehnel’s Aperture, a finalist for the 2019 PEN Award for Poetry in Translation. She’s also the editor of Scattering the Dark, an anthology of Polish women poets (White Pine, 2016). Also a poet, she’s the author of the collections Metropolis Burning and Beyond the Velvet Curtain. Her work has received many awards, including the Charity Randall Citation from the International Poetry Forum. She was Indiana’s Poet Laureate from 2012-2014.