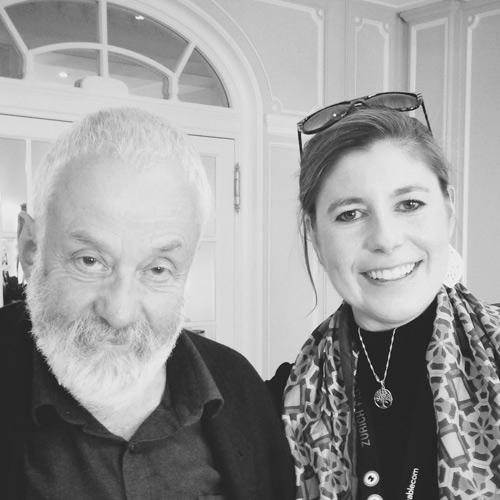 When I sat down with legendary film director Mike Leigh, I knew I wanted to focus on talking with him about empathy in storytelling. Actress Sally Hawkins (in her Golden Globe acceptance speech) called him “a fearless, compassionate, passionate human being,” and his films are a testament to such a depth of emotions, embodied in the strength, range, and delicate complexity of his characters. I had connected years ago with the character of Poppy from Mike Leigh’s exquisite comedy Happy Go Lucky… As an educator and a humanist choosing optimism over cynicism, I associated with Poppy’s tenderness and humor, and found a deep sensitivity underneath the comedy.

Almost a decade later, here we were, Mike Leigh and I, sitting in a salon at the Baur au Lac hotel in Zürich, across from each other at a white linen table, a carafe of water beside us. The conversation between us was easy, rapid, and fluid, with laughs along the way. To summarize our conversation would not do it justice; what follows is the dialogue itself:

CK: I want to ask you about the character sketches and how you approach creating a film. All of the characters seem like real people that I could know, and I’m from Boston not Britain—

ML: (laughs) Even though there are no real people in Boston, I still feel there are characters I could know, that’s what that sounded like. (Both of us laughing.)

In a way, the fundamental answer is contained in the question. It is about putting real people on the screen. Generally, actors, to whatever greater or lesser extent they are skilled, are able to come up with some stereotyped characterization or play themselves.

What I’m in the business of is to go way beyond that . . . in fact, not to deploy that at all, but simply, in a much more complex way, to make it possible to collaborate with actors, so that we really are constructing multi-dimensional, multi-layered, complex, contradictory, real people, who are socially, ethnically, sociologically, et cetera, placed in society, and live and breathe. And that makes it possible for me to tell stories in a way that you can genuinely believe in. So, that’s the job.

CK: How do you approach film? In reading about your style, it seems that you involve a lot of play with your actors and improvisation. What are some of your techniques, to bring out authenticity?

Even the film we made about actors, Topsy-Turvy, we approach actors as people.

So, when you say you resonate with characters, such as Poppy in Happy Go Lucky, you appreciate the complexity of this young woman, which we worked at for a long period.

CK: Yes, I saw some scenes as the “tip of the iceberg”; there was a whole character underneath, perhaps offscreen, and you never saw those scenes. There was humanism. All of the characters were making mistakes, and yet there was such humanity, and a respect for them; a belief they are innately good. At times, you could view Poppy as naive for making a choice to be positive-

ML: You could see her as naive, but she isn’t. She’s not naive at all. And actually, you can say of any character, in anything including Hamlet, Macbeth and King Lear, that there are scenes offstage that you can’t see, but there actually aren’t. And there aren’t in Happy Go Lucky, either. There are a substantial number of scenes and amount of material where you do see her positive, funny, crazy, anarchic side, but there also, there is a whole lot of stuff where she is responsible, sensible, you see what she’s all about.

It’s interesting to compare Poppy with Johnny, the central character in Naked. Both characters are idealists. He is an idealist who is frustrated and disappointed in the world, and you see him go in on himself and behave negatively as a reaction. She is the same but she’s positive, she deals with it. To take all this back to your main thesis and question, it’s about putting on the screen­­-not in just the central characters, but in the minor characters as well, plausible, three-dimensional characters, and that’s a complex process.

CK: In doing all of this, are you aiming to impart some kind of truth to an audience?

ML: Obviously, of course. Implicitly, of course if the question is, what truth, well, then we have a different question! (Laughing)

CK: I didn’t ask that question, but- (laughing)

ML: That’s a question with no answers. That, you simply have to take from what it means to you, when you see it.

CK: Whether it’s Career Girls, Secrets & Lies, or other films of yours that show truth in storytelling, I appreciate that I don’t feel beaten over the head with a moral lesson. You give space to breathe. And I’m able to walk away feeling as if I experienced something together with the characters.

ML: I appreciate that. My film Meantime, which is about unemployment, made in the early 1980s, was criticized rather viciously from the hard Left, as I have been on occasion, because I didn’t lay it on the line. I didn’t bang drums and punch out messages. Naturally, it never occurs to me-that’s not what you do. I’m naturally disposed to make films that leave you with stuff to deal with yourself, to walk away, to think about, ponder and respond… Just to go back to Happy Go Lucky, when it came out, I was astounded by a number of critics, especially the critics in London, who are extremely vicious, who responded by saying that she’s a horrible woman, by the end they wanted to kill the character. I thought, where were they? Were they asleep during the film? But that’s part of the problem, when you receive ideas about what you think a movie should be, and therefore it blinds people to what the movie actually is and what it’s doing.

CK: Do you have thoughts about films reaching a global audience, and generating a social effect?

ML: Cinema is a global language. Hollywood spotted it during the First World War, which is why Chaplin became an international icon only a short time after he began making films, for precisely that reason.

The great thing about making feature films is that one knows that they will travel. And that’s the nature and the culture and the commerce of international cinema. What is great is that there is World Cinema. There are two entities in the world: World Cinema and Hollywood, and Hollywood is a separate planet that runs parallel to what we’re talking about. Also, global and international, but it has its own agenda and function.

I think what’s important in World Cinema, and it’s obvious, and not a very profound observation… is that it’s a universal language, yet the most universally successful kinds of cinema are the ones that are always rooted in their own specific world, which is why I am unapologetic about making my films based in Britain, but the subject matter is universal.

CK: The compassion that comes across in characters can speak to different audiences. Eventually, it could give me a view of what life is like in another part of the world, if I couldn’t travel there myself… Eventually, that could have some social impact.

ML: I hope so. We made that film, Secrets and Lies, and letters came from all over the world… quite apart from the fuss from different quarters that my film Vera Drake raised, because that’s a massive issue for many people…

CK: And, look at how much people universally appreciated that film.

CK: You’re an auteur, although I should not project it upon you…

ML: I’ll take your word for it.

CK: If you were to step back, what does it actually mean to you?

ML: I’m a humanist… I’m in the business of making you laugh, making you cry, entertainment, the circus aspect of it-the showbiz aspect of it. For me, entertainment means, literally what it says, to keep you absorbed for two hours and twenty-three minutes, whatever it is, and to give you something substantial to go away with, and to think about the world. I’m not disposed to be any more pompous about it than that, even though you’re inviting me to be profoundly pompous.

CK: Well, there’s often more to leave with in what’s left unsaid… I have to mention the end of Career Girls. There isn’t much dialogue, just hugging at the train station… and I cried.

ML: Good. The thing about Career Girls, it gets less space and recognition than any film I’ve made. It’s as if we had never made it. So when I meet someone that really gets it, I’m very pleased, thank you.

CK: Thanks to you.