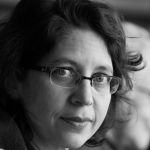 Namrata Poddar writes fiction and nonfiction, serves as Interviews Editor for Kweli, and teaches literature and writing at UCLA. Her work has appeared in several publications including Poets & Writers, Literary Hub, Longreads, The Kenyon Review, and The Best Asian Short Stories. Her debut novel, Border Less, released in March 2022 from 7.13 Books, was a finalist for Feminist Press’s Louise Meriwether First Book Prize. She holds a Ph.D. in French literature from the University of Pennsylvania, an M.F.A. in fiction from Bennington College, and a Mellon Postdoctoral Fellowship in transnational cultures from UCLA. You can find her on Twitter and Instagram.

Anjali Mitter Duva: The title, Border Less, clearly speaks to many types of borders: between nations, cultures, social classes, gender roles. Tell me the story of the title and its particular meaning to you.

Namrata Poddar: Agree. Borders here refer to the boundaries around a national, cultural, social or gendered identity that most characters in Border Less negotiate. The title can further be interpreted as one word or an adjective, in addition to the obvious verb. So in a literal way, the title as an adjective, borderless, refers to the migrant status of most characters in the novel, characters who cannot be contained by the borders of any one nation state. Also, considering how much the book centers the lives of 21st century brown women, the title alludes to their quest in wanting to break free from the constraints that history and society place upon them as mothers, daughters, daughters-in-law, partners, or lovers, and their ability to tune into a higher self and feel borderless.

Lastly, if I had to center one meaning of the title for you, it’s hinted on the book’s cover art by Harshad Marathe, and in much more direct ways in the novel’s last chapter, “Kundalini,” where Shakti, the Hindu Goddess of creation, performs the cosmic dance of destruction and creation, the Tandava, and urges the western literary establishment to border less the novel as a form.

AMD: One of the recurring themes in the book is that of belonging and the meaning of “home.” In the opening scene of the chapter/story called “Chutney,” Dia, whose story is the thread that weaves the sections together, and her boyfriend Yash “had laughed at the same jokes on Bollywood, Apu, chai tea latte, Hot Yoga, and haggling on Fashion Street, but were they laughing with the same jokes, she wondered…” There are a lot of references to being an insider and an outsider, to trying to fit in even in places where one supposedly belongs. What would you say is the arc of Dia’s journey with regard to this theme?

NP: Not sure I’m any good at answering questions about my novel when it comes to plot or narrative arcs but I’ll try. Fairly early in the book, Dia migrates to the United States, and even if the first half of the novel, “Roots,” shows her in Mumbai, it shows her experiencing “home” as an expat, one who navigates her share of a reverse culture shock. Migrants like Dia who switch homes and continents rarely belong to one place, and I believe this is an implicit assumption in Border Less. Dia is assuredly seeking home, but I don’t see her seeking it in land, in a specific place, country, or a passport. In fact, in the chapter you share, “Chutney,” that takes place early in the book too, Dia already knows she “belongs to the race of wanderers,” not settlers. To answer your question then, I see Dia’s quest for home as something that would rescue her from life’s challenges—material, emotional, existential. And she seeks this home in migration to “the land of the free,” in pursuit of the right vocation, in romantic love, or belonging in conventional notions of family, either through blood ties or through marriage. In the penultimate chapter, “Homecoming,” we see her much more at ease with her life journey, we see her appreciate a rootedness in a like-minded community, and most importantly, we see her embrace home as a state of mind and a state of heart, a rootedness in trust toward life and her place in it, in any given moment.

AMD: At 157 pages, the book is short, but spans 50 years or so, with an impressive range of perspectives. How did you select which moments, and which characters, to include?

NP: In the earlier stages of writing the book, this selection was by feeling rather than thinking my way through my drafts. I had more characters speaking in my early drafts, but I retained for the book those whose voices felt most compelling, and also least heard in South Asian American literature. These include immigrant maids and refugees who center a South-to-South migration over migratory routes from a Global South to a Global North, working-class Indian Americans, the coexistence of first- and second-generation Indian Americans in a room as friends or lovers rather than their more predictable presence in diasporic literature as the parent and the child, exhausted new mothers who don’t romanticize caregiving, et cetera. On how many voices to keep and how many to toss, on how to balance the multiplicity of voices and perspectives within the manuscript, we’re really talking about proportion here, so again, I negotiated these decisions from a place of intuition over intellect.

AMD: I was struck by the structure of the book. As a writer with a background in urban planning, I appreciated the layers and interconnections, the way the fragments add up to the whole, and the recurring images. Could you tell me how and why you chose the structure you did, and whether you envisioned it from the start or whether it grew out of the writing?

NP: Glad to know you enjoyed the novel’s architecture. And no, I did not pre-decide one for Border Less. The book’s form developed out of its content over many years. The struggle I often faced with the book’s structure, though, was a back-and-forth between the voices in my head mediated by the American literary establishment, voices who were telling me how to do “good storytelling,” versus my drafts who were pleading with me to listen to them and the world specific to them and not contain them within neat “borders” of American short fiction or the modern realist novel, two narrative forms that dominate not only the traditional writing workshop but also contemporary literary fiction in the U.S.

And sure enough, where my own writing was guiding me felt over time as the right structure for Border Less. As you know, the novel is divided into “Roots,” predominantly set in the archipelago city of Mumbai, and “Routes,” set in a greater Los Angeles that’s like an archipelago in its urban planning, even if the novel goes back and forth between other places in the world.

While the structure emerged organically out of my drafts, in the book’s later stages of completion

I did consciously include hints throughout to guide the reader. For instance, the novel opens with an epigraph by the Nobel-nominated Afro-Caribbean writer Edouard Glissant, who is a big influence on my thinking about migration, cross-cultural exchange, and an aesthetic of archipelagic or discontinuous writing as a truer reflection of stories by the colonized than a colonial aesthetic of wholeness, flow, and continuity that defines the modern realist novel. Besides, as someone who was raised in Mumbai in a postcolonial India and lives in greater Los Angeles, and as a brown woman writing under a global patriarchy within an imperialist country, I resonate with Glissant’s ideas on archipelagic and postcolonial storytelling in deeply personal ways, too.

AMD: Where do you place your book within the realm of South Asian literature, specifically South Asian immigrant literature? Are you finding that reviews are “getting” it?

On reviews by industry professionals, I feel fortunate that the response to Border Less has been very positive in general. Different reviewers resonated with different moments in the novel, and that’s fascinating for me to learn—who is touched by what in this fictional world, especially as it plays with form and diasporic perspectives in many ways. The only time I felt a professional reviewer didn’t get Border Less was, interestingly, a South Asian American appraising the book for a trade outlet. The review listed many specific details that showed a good understanding of Border Less at a surface level. It missed the book’s core, though, by offering a colonial understanding of the novel, and a western gaze to both Mumbai and the Thar Desert, spaces that deeply influence Border Less in its content and form.