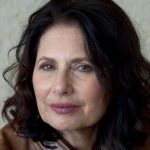 Grass swords browned at the hilts
drowned in fog. I come across their sharp points

and walk across that grass
where it can offend me. Cut by cut.

I wanted to see it for myself—huts, forests, the sound of rifle fire
round after round, what we heard in an alleyway

jump off the walls, when your daughter went back to fetch her boots
like coming here just to understand what cannot be

recovered. And again, turning to the earth.
Its fields of sunflowers

building light, mimicking the path
of the real sun,

the real swords, the real grass,
because this cannot be forever. The lifting of this fog

to show me clearly—hover over my failures.
I who was told nothing and could not imagine my parent’s silence

as the accompaniment to trauma. Walking toward the abandoned distillery
where you were forced to work,

I hear the ping of stone, there are ghosts here

released in the absence of bodily form.

The shattered, sticking into the ground, unsanctified

low-lying in a field, bear themselves sharply.