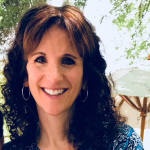 Over coffee, my friend tells me how he drove to Juarez
with his mother’s dresses, his father wanting only one
as a remembrance. When he’d piled them into the truck bed,
he found himself zippering a sleeveless checkered jumper,
a clichéd movie gesture he couldn’t stop
right away.

His father told him where to go, to a man who knew
his mother, his family, their pre-American life, a man
who could offer Condolencias when my friend arrived
at his door, outstretching his arm a la sala de estar,
wooden rosaries adorning the walls and closets
holding others’ suits and skirts for later
redressing.

So, he traveled south, listening to the plastic hangers’
rattle, their syncing with the tires’ rotations, circle into circle,
click after click, like a coded message, his mother’s calm
jarring him to attention.

When driving onto Eje Vial Juan Gabriel, only miles
from the man’s house, my friend turned
pink, the sunset’s streaks warming his windshield,
his face, all around him, a city bathed, the aura
so strong it divined the car past the man’s street,
trajecting ahead until my friend arrived
at one of the pink cross clusters
commemorating so many murders,
young women not to be forgotten. Once there,
still blushing in the late day’s light, he exited
the truck for the matching crosses, and one
by one, draped them in his mother.