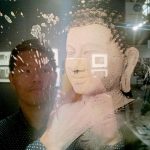 Artist Statement:
My work investigates my Vietnamese-Cambodian heritage and our collective memory of wars in Viet Nam, Cambodia, and Laos. The themes of mortality, memory, history, landscape, justice, evidence, and spirituality encompass the work. My technique incorporates my invention of the chlorophyll process, in which photographic images appear embedded in leaves through the action of photosynthesis. My newer body of work focuses on nineteenth-century photographic processes, applying them in an investigation of battlefield landscapes and contemporary memorials. A recent series of daguerreotypes celebrated the United States National Park system during its anniversary year.

One Week’s Dead Series:
When I was in college, I found this June 27, 1969 issue of Life Magazine’s The Faces of the American Dead in Vietnam, One Week’s toll. In this issue, Life Magazine published the portraits and names of 242 US soldiers killed during the Week of May 28 to June 3, 1969, in the Vietnam War. In these portraits, we are reminded that a death in a war is not just a number. But also the end of actual life. These faces are fathers, brothers, sons, and they became part of our collective memories. To photograph is to remember. A photograph is a picture of the past. A photograph is only able to record a slice of time. The documentary filmmaker Ken Burns said, “Photographs are the DNA of our memories.” I love that idea. Photographs give us the instruction to remember.