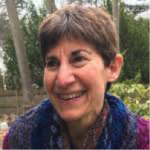 Barbara Siegel Carlson: The title of your new poetry collection The Queen of Queens pays homage to Geraldine Ferraro, who in 1984 became the first female vice-presidential or presidential nominee representing a major party. At the time Ferraro lived in Queens, N.Y. A number of your poems feature her as an apparent role model as a woman, leader, Italian, etc. When did you start writing about her and to what extent do you see her and the other powerful and influential women (such as Madonna and Nancy Pelosi who also appear in the book) as part of your identity as a way to navigate complexities of being a woman in this time and place? Out of curiosity, did you ever meet Ferraro?

Jennifer Martelli: My reasons for starting my “Ferraro” poems were not noble! I was thinking of the songs and clothes of the early 80s. I was in college then, taking full advantage of the excesses of that time: fashion, music, drugs. Despite all of that, I was proud and excited to cast my vote for Geraldine Ferraro (more excited for her than for Walter Mondale). I was shocked at how many people—women—refused to vote for that ticket because she was a woman! And at how many Italian-Americans refused to vote for her because she was staunchly pro-choice. All of this—the historic nature of her nomination and the misogyny—left a mark on me. As I began unpacking that period of my life, I wondered why I was responding to her now, as an adult? And I started to really experience how violent misogyny is. I had to confront the misogyny in my experience growing up in the 60s, 70s, and 80s.

Much of the book was written pre-pandemic and before Kamala Harris’s nomination, yet I was struck by the circularity of current events—many of the same people in the 80s were still a part of our American fabric—for better or for worse. As the book progressed, how could I miss the replay of yet another cruel and feckless administration that ignored a pandemic, as Reagan had with AIDS? The elevation of Kamala Harris to the vice presidency seemed even more important to me.

Madonna (and the Madonna) and Speaker Nancy Pelosi serve as icons. Not only are they examples of hugely successful women, they are Italian-American women who used their voices in very profound ways. They changed things in music and in politics.

BC: The cover image “Pearls of Light” displays strings of pearls. Writers, especially poets, often have an obsession over something that acts as a kind of flashpoint in their work. For you, at least in this collection, it is a pearl. The pearl is such a multi-faceted image originating in nature with powerful cultural, psychological and even spiritual significance. The pearl seems to have its own narrative here beginning with “16 Reasons I Became a Gray Pearl” to the evocative ending image of the “small pearl of old-country dough.” What is it about the pearl that makes it such a necessary and revelatory symbol in the collection?

JM: Don’t you love that cover image? This is a large installment by the artist Diana Torje called “Pearls of Light.” I knew I had to have it! Back in the 80s, we were all wearing pearls: long strands, colored strands, chokers of pearls. Madonna wore them in her “Like a Virgin” video! Also, if you look at Ferraro’s acceptance speech at the Democratic National Convention in 1984, she is wearing pearls. Pearls are circular, like my book. I also like the odd nature of a pearl’s creation: protection made of spit! It’s a mouthy gem!

BC: Can you talk a little about your two poems “Toxic Shock Duplex” and “The Year of Geraldine Ferraro Duplex” that use the duplex form, which was invented by Jericho Brown. Can you tell about this form, how you arrived at it, and why it works so well with the subject matter in the poems?

JM: Jericho Brown was so generous in sharing his form, which is a blend of the sonnet, the ghazal, and the blues. I don’t write in form a lot, but I loved how this vessel was  obsessive in its sounds, with just the right amount of disruption. Like a pearl, it  closes around itself, too!

BC: Your poetry is gritty, grounded, fearless, complex and luminous in its gaze and sweep in the way you honor the details of a cross-section of life growing up in the 80s in coastal Massachusetts as part of an Italian-American family. You juxtapose the personal against the political world from the 80s up to the present, focusing largely on issues of cultural and gender politics. There is also a sense of anger and passion toward the injustice women have experienced and continue to experience, up to the present moment of the likely reversal of Roe v. Wade*. How do you navigate this minefield and find balance and transcendence through the act of writing poems, especially in a poem such as “When Was My Anger Conceived?” and “Yesterday I Was So Angry, I Broke Things With My Mind”?

JM: I think it’s important to be angry—if you want to be, if you are—in a poem. For so long, I wanted to sound “at peace” with situations, or world-weary, or at least, not so angry! I was afraid to use the word “abortion” or “rape” in a poem. But I live in this world and those things exist in the world. I’ve never understood why I wasn’t writing about them if they affect me. As a poet, though, I don’t want to use anything gratuitously or to shock. I hope I’ve been able to apply some craft.

The poems you mentioned speak to my specific anger, which probably has a long history. This plays a part in the book too: how to give anger voice? Who will listen?

BC: I find a mystery at the heart of your work that you come at indirectly through very specific detail whereby the particulars seem emblematic and mythic. Several poems—“Strega,” “Oracular,” “Prognostication” and “Tongue Root”—address fortune and the spiritual. I’m thinking of “Tongue Root” where the speaker makes a pentacle of five objects found among her family’s things. The poem’s trajectory leads from things to vowel sounds from the Italian names to the ghosts within. What did you mean when you say “What I conjured then, I live with now. I conjured women nobody heard.” Can you talk of your process here and where you arrive?

JM: I tried to weave the oracle (the seer or the Strega) throughout the book to underscore the sense of the impending or the inevitable. Could we have foreseen the rise of Donald Trump back when he was simply a corrupt businessman in the 80s? Did we overlook something? Could we have predicted (averted) the catastrophe of the Covid-19 pandemic had we heeded earlier signs? Or is it in our nature to circle and circle?

I also touched upon my own fears of not being heard. This reaches back to my previous book, My Tarantella, which recounts the murder of Kitty Genovese. The myth of this story is that she screamed for help as she was being stabbed and was ignored. As I was writing this book, the horror of the 2016 election happened and another woman was not heard.

“Tongue Root” was fun and freeing to write because of its hybrid nature—it’s not really a poem! I wanted to address the idea that I—we—carry generations of pain in our bones. When we move, we release those ghosts.

BC: The final poem “Forgetting” begins with “I am unbaked bread because I’m soft and I rise.” It embraces the soft, especially in the image “Inside my yeasty gut, a small pearl of old-country dough / implants in the pink lining, a starter pearl grown so long ago, / some people call it mother.” The images soften further to the ending of “I am the long breath through the lips, the double space no one here uses anymore.” We end on breath, our origin. How do you see the title “Forgetting” as fitting for this poem as well as the finale for the collection as a whole?

JM: “Forgetting” was originally the penultimate poem in the collection; “The Challenger” was the last poem, ending the book with water instead of air. We went back and forth a lot! We decided on “Forgetting” because it circled back to the proem, “16 Reasons I Became a Gray Pearl,” and the idea of dissolving.

I guess it’s not really a happy poem, though it does speak to a sort of freedom by examining and finally rejecting some of the norms the speaker was raised with.

This poem began when I came very late to a panel/tribute for Louise DeSalvo, who had recently passed. I was so late, I had to sit up front and way too close to the speakers!

The title wasn’t easy to decide. It was originally called “Crown Shyness,” which is a phenomenon that occurs when the tops of trees (the crowns) won’t touch each other and create a canopy with channel-like gaps. As much as I loved that image and used it in the poem, “shyness” wasn’t accurate. The poem was about sound, silencing, and swallowing.