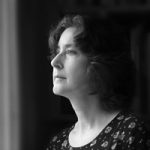 Death, by which I mean the sudden death
of snuff bottles and weeping willow trees,
undiagnosed roads littered with sorrows,
and postal clerks languishing along the canals.

And Sex, of course. That goes without saying.
The insatiable queen; the pale and ruminating
heifer; the snails, incompatible on a blue plate.
(You see how the links begin to accrue.)

To a certain degree Love,
but with a teaspoon of Despair—
star-crossed bats, an aging incognito ragdoll,
three Polacks stumbling into a bar.

Not Hate so much as Grudging Defeat,
as when day breaks on time
or the sparrow scorns her basin of chickweed
while the furnace belches rank and artless air.

Although Wonder, without a doubt.
Those curious prosthetics, those animalia
with their clever hums and coos,
those quivering visions of Albion.

And Yearning, always Yearning:
the one-eyed child leaning out of the highchair,
the lord protector pacing his damp yew walk
as the Calydonian hunter straggles after the boar.