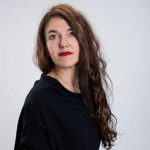 Poetry in translation
by Bożena Boba-Dyga

Translated from the Polish by Ewa Chrusciel

You’ll see, you scum
You will see
Soot of Moscow, smoking ruins of your cities
Polluted
Forever cursed and dead
There won’t be anybody left to rebuild

Bożena Boba-Dyga – Polish writer and artist, art conservator, and cultural network facilitator. Author of ten volumes of poetry. Published in anthologies and periodicals in Poland, the USA, Israel, Germany, Slovakia, and Ukraine. Translated into Bengali, English, French, Hebrew, Spanish, Lithuanian, German, Slovak and Ukrainian. Recording artist featuring songs and contemporary music. Founder and president of the Art Forum Foundation and Director of the Krakow Accordion Festival. Awarded the Golden Cross of Merit by the President of the Republic of Poland, and the Honorary Badge of Merit for Polish Culture by the Minister of Culture and Art. Memberships include The Polish Writers’ Association, The Association of Polish Artists and Designers, and the Music Center. A graduate of the Academy of Fine Arts in Krakow. Scholarships include the European Tempus Program and German DAAD.

Kateryna Devdera is a Ukrainian poet and translator. Author of three books of poetry: Spivprysutnist (2011), Letters and Elements (2015), Letters to the Master (2015). She has translated poems and prose from Polish and Spanish into Ukrainian.

Ewa Chrusciel is a poet, translator, and educator. She has three books of poems in English: Of Annunciations (Omnidawn 2017), Contraband of Hoopoe (Omnidawn 2014), Strata (Emergency Press 2009, reprinted by Omnidawn, April 2018), as well as three books in Polish: Tobołek (2016) Sopiłki (2009), and Furkot (2003). Her book Contraband of Hoopoe was translated into Italian by Anna Aresi and came out in Italy with Edizioni Ensemble in May 2019. Her newest book Yours, Purple Gallinule is scheduled for publication in 2022 by Omnidawn Press.

She also translated selected books by Jack London, Joseph Conrad, I.B. Singer as well as the book of selected poems by Jorie Graham, and selected poems of Kazim Ali, Lyn Hejinian, Cole Swensen and other American poets into Polish. She is an Associate Prof. of Humanities at Colby-Sawyer College.