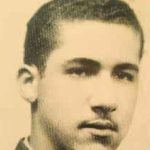 Poetry in translation
by Jacques Viau Renaud and Ariel Francisco

Translated from the Spanish by Ariel Francisco

Homeland
from your starved latitude I felt
my people rise through sonorous essences
and heavy breaths.

Homeland
I felt how you grip through my blood
squeezing my throat
bruising my neck
screaming along to my song.
I witnessed your anguish from afar
blooming in treetops
erupting from fruit,
in fleeing birds
inhabiting your blank expanse of fallen tears.

I heard your voice
lift on the scent of my cry
and my sweat
the sweat of a peasant worker
cut down like old mountain pines.

I saw you streak across the cheeks of children
fighters
finding deaths final form.
I heard your mothered call with withered children
you yourself withered

fertile mother
impoverished by those stealing your bright ores
like children’s tears
and dissolving the steel of your bowels
in the intense embers of hatred
thieves funded by kings.

Oh homeland
my homeland
every time I speak your name
a fissure forms in my heart
and from its depths your eyes stare back
and see the world
and see America
the Antilles divided by the dollar
the one-armed man working for the dollar
the woman shattered in the suburbs
or brothels
for the dollar,
and up on our beaches dressed in linen
laid in large gray luggage
atop giant biers bringing our America
together with rehearsed smiles:
the dead.

Oh homeland
bloody pennant
from the screaming center
I await you
I hear you
I sing.

Maybe you, my homeland
are thinking of me
of my friend Juan or Pablo
who died for you
severed
in the yellow grimace of the cornfield
where the sun multiplies in every grain.

My homeland, crying,
bleeding, suffering,
but we
are bare, every minute building
towards the terrible advent of justice.

My homeland, crying,
but soon we’ll cut the cords that constrain your song.
We’ll burn with a new fire
that grows and keeps growing
over the laborers’ bruised backs
where the sun that leans into them
comes to rest.

The town’s hunger
the town’s hatred
a tornado of shouts and angry insatiable thirst
terrible shuddering of this world
fall of the unforgiving dollar
slowly rebuilding
grain by grain
every stolen stalk of hope.

Homeland,
those still unborn
those of us born and growing
continue to be born and grow
always
every minute—
hatchet, stick, and picaxe
knives and clubs in our fists
naked
charging through the trees—
will make our land
of this land
a home for work and justice
song of nature, stone, and humanity
treading the Antillean earth
scaffold of the Caribbean.

Every leaf turns into a word,
every rock,
love’s hard work,
every courageous tomb.

The guerrilla fighters
part the rock’s eyelids
and feed the furrows,
the water dampens their words
washing their names like seeds.

There, atop the earth
on the Manaclas Mountains they raised their tents.
There, under adoring treetops they took shelter
only the wind knew,
stained blood on cracked loneliness.

There they learned to climb like vines through the air,
learned to recognize
the trembling fatigue of the stone womb
while composing creatures
below the celestial solitude.

There they learned the language of leaves,
learned the earth’s cry
the prairie men inhabit,
wild city sounds
free of ash and dust.

There they raised their tents
embracing night’s hard outline
without the people seeing death’s rounds
over the towns,
over the guerrillas open dwellings.

O! If only my voice rang like theirs,
my eyes housed in the space where they lived and died,
those who climbed the stars
and bleed the hard stones,
to speak to the hard silence of the Manaclas.

If I could follow their footsteps,
stop in each tread,
pick up every piece of green cloth,
every word,
every message made of mud or granite,
every bloodied silence
and broken solitude
I would hold in my hand the original life,
that solitude’s voice,
entering the ears and eyes of the guerrillas.
If one wasn’t there,
what can they say?
If I didn’t see their blood feeding the forest,
what would I say?
If I didn’t know their routes,
of their nights spent under the wind and rocks
how would I recognize their children of vines and granite and mud?

They rose,
opened their bellies and our homeland entered their entrails,
their blood ran through the homeland within them.

And from this now nameless meadow,
in the middle of these anonymous streets
I go, reconstructing
with fragments of solitude and silence in each step;
every word,
every moment where men and earth appeared.

I’ll go through the rocks,
I’ll speak with the trees
I’ll feed on new roots,
they’ll tell me the history,
they’ll show me love’s face,
the frustrated stature of innocence,
because if you tell me this isn’t the earth’s childhood
than explain, what is love?
Where does innocence live?

They raised their voices to defend their homeland
because she was dying
from so much spilled blood
from her assassin sons.

They rose to the mountains
to save what was left of her,
the green skin of Quisqueyana life,
her belly wide with
virgin rocks and blind marble.

Jacques Viau Renaud (1941—1965) was born in Haiti and raised in the Dominican Republic following his father’s exile in 1948. During the Dominican Revolution of 1965, he joined the rebel forces in support of ousted president Juan Bosch, fighting against the US backed dictatorship. He was killed in battle at age 23.

Ariel Francisco is the author of Under Capitalism If Your Head Aches They Just Yank Off Your Head (Flowersong Press, 2022), A Sinking Ship is Still a Ship (Burrow Press, 2020) and All My Heroes Are Broke (C&R Press, 2017), and the translator of Haitian-Dominican poet Jacques Viau Renaud’s Poet of One Island (Get Fresh Books, 2023) and Guatemalan poet Hael Lopez’s Routines/Goodbyes (Spuyten Duyvil, 2022). A poet and translator born in the Bronx to Dominican and Guatemalan parents and raised in Miami, his work has been published in The New Yorker, American Poetry Review, Academy of American Poets Poem-a-Day, The New York City Ballet, Latino Book Review, and elsewhere. He is Assistant Professor of Poetry at Louisiana State University.