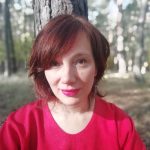 translated from the Polish by Maria Jastrzębska

There was only one and he died instantly.
Someone had trodden on him on the first step,
if you count from the bottom, or on the last if you count from the top.
Something poured out of him as he lay there. My daughter
asked if it was him I had in mind
when I talked about Spring miracles and new life.
We were just on our way somewhere and all around us
it was like the Great Mushroom War: nothing had changed
but nothing was the same either. Yes, it’s him
I had in mind, in my speech and in my heart. And look
what happened.

That night someone cleared him away. Few saw him,
me, my daughter and the cleaner. Most of us are still alive
though some have fallen asleep.

The Great Plan B

On my ninth birthday the scoutmaster
gave me a card with the number of days
I’d already lived. It was an extraordinary number
shimmering and dancing, one of those numbers
you can’t save
in notches on a wolf’s bone
or in letters or digits, you can only
speak it onto a recordable postcard or carve it in basalt.

Do you know what our odds are? Zero.
But I’ve learnt to play for time
as it’s the body no less which is left on the battlefield.

A girl with weak lungs can walk
in the mountains with the aid of a song, but tea
which another girl drinks writing this song
cools quicker than the time for cooling takes.

What are these special procedures?
Does it mean we’re wild ducks
flying over the grand canyon in an ever lacier
formation? Or a peep show: how is it
that this booth contains the second
and subsequent losses of everything? Could the explanation
be parallel universes or a clever
play of mirrors. Where do they go after work?

You don’t know. You don’t even know whether if you trace
my shadow on the wall, you’ll hold onto me longer,
or maybe the house will collapse, the shadow go its own way.

Justyna Bargielska (born 1977) – a poet and a prose writer. Her first book Dating sessions came out in 2003. Her second book China Shipping came out in 2005. Her third book Dwa fiaty (2009) was awarded Gdynia prize. She is a recipient of numerous literary awards, including Rilke and Bieriezin award. In 2010 she published her first prose work Obsoletki, for which she received Gdynia Award in 2011 among other awards. In 2012 she published Bach for my baby, which was nominated for many prestigious awards. In 2013 her novel Małe lisy came out and in 2014 her poems Nudelman.  Her latest book of poems, Dziecko z darów (2019) was also nominated for prestigious awards. Her works were translated into English, Russian, German, French, Slovenian, Ukrainian, Dutch, and Islandic. She lives in Warsaw.

Poet, editor and translator Maria Jastrzębska has published four collections. A fifth, Small Odysseys, will be published by Waterloo Press in 2022. Her work has been widely anthologized including Hallelujah for 50 ft Women (Bloodaxe) and Wretched Strangers (Boiler House Press) and is translated into Polish and Romanian. She co-translated Iztok Osojnik’s Elsewhere with Ana Jelnikar (Pighog Press 2011) and translated Justyna Bargielska’s The Great Plan B (Smokestack 2017). www.mariajastrzebska.wordpress.com